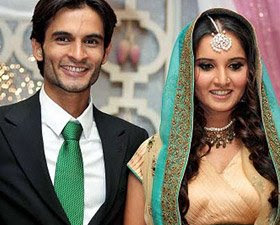 ’s tennis queen, Sania Mirza broke many hearts as she got engaged to childhood friend Sohrab Mirza in a private ceremony here at hotel Taj. It was attended by a few special and close invitees, close to 300, including Indian tennis ace Mahesh Bhupathi, south movie star Chiranjeevi and some political personalities. Sohrab will pursue MBA in Britain and his father owns a chain of bakeries in the city.
The engagement of the Indian tennis' poster girl also put to rest all the speculation about her romantic links with sport stars and bollywood actors.The 22-year-old Hyderbadi has been linked with Pakistani tennis player Aisam-ul-Haq Qureshi and bollywood actor Shahid Kapur and also Telugu superstar Navdeep in the recent past.
Sania's father Imran Mirza had earlier made it clear that Sania would continue playing the game after her engagement and the wedding would take place a couple of years later. , 's first female player to win a Grand Slam title, is likely to leave for later this month to participate in the open and other competitions.
Posted by Vijay at 11:18 PM